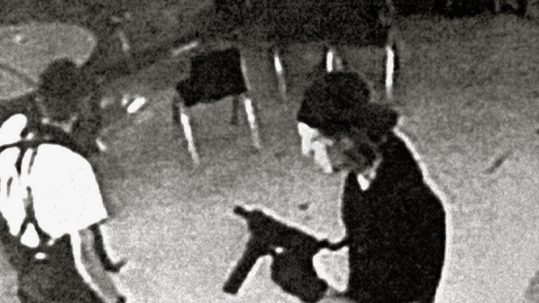 It was the darkest nightmare of every parent come to life – and it happened in the land of “It can’t happen here.” The setting was Littleton, Colorado, a comfortably middle-class suburb of Denver, a place where people come to raise a family, and where the arch over a hallway at local Columbine High School is inscribed with the motto: “The finest kids in America pass through these halls.”
But on April 20, 1997 – the halls of Columbine suddenly became the scene of a murderous reign of terror. Coverage of the shootings was intensified by the ubiquity of 24-hour cable news, and its constant need to come up with fresh information – often incorrect. The media quickly realized they simply had no protocols for a mass casualty incident of such dimensions.

Clinton speech after the shooting