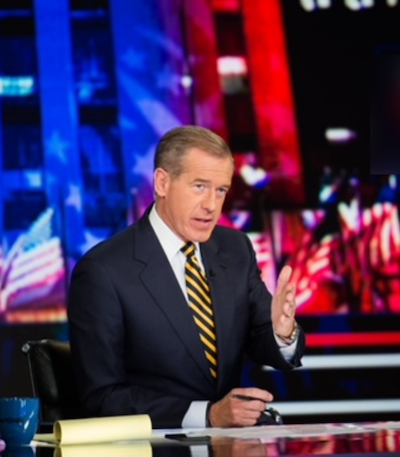 In his nearly 40 years as a broadcast journalist and anchor, Brian Williams has interrupted more than his share of broadcasts to report on breaking news. Currently anchor of The 11th Hour on MSNBC and breaking news anchor for the network, he was anchor and managing editor of NBC Nightly News for a decade, during which time it was the most-watched newscast in the United States. He has received over a dozen Emmy Awards, ten Edward R. Murrow Awards, four DuPont Columbia Awards, the Walter Cronkite Award for Excellence in Journalism, and the industry’s highest honor: the George Foster Peabody award, for his coverage of Hurricane Katrina in New Orleans. James Wolcott, writing in Vanity Fair, called his coverage of the hurricane and its aftermath “Murrow-worthy.” Williams is a former Chief White House Correspondent for NBC News and in 2007 was named by Time magazine as one of the 100 most influential people in the world. A twelve year veteran of local news, he arrived at NBC News as National Correspondent in 1993.

Over the course of 4 decades in television news, Williams anchored coverage of many of the major events of the modern era, including the death of Princess Diana, the killing of Osama Bin Laden, the Miracle on the Hudson, the Boston Marathon bombing, the school shootings at Columbine and Sandy Hook, the Iraq War and invasion, both Trump impeachments and the 1-6 riot and insurrection at the Capitol, in addition to countless Presidential debates, campaigns and election nights.